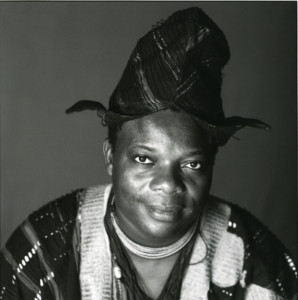 In the mid-1980s, Romuald Hazoume began an extended series of works made from discarded plastic containers, and in particular from gasoline canisters. After slight modi cations, these objects became masks, which subtly reveal Hazoume’s critical vision of political systems. He has said of his work: I send back to the West that which belongs to them, that is to say, the refusal of consumer society that invades us every day.

His work has been widely shown in many of the major galleries and museums in Europe and beyond, including the British Museum, the Guggenheim, Bilbao, the Centre Georges Pompidou, Paris, Fondation Louis Vuitton, ICP, New York, the Victoria & Albert Museum, London.

Hazoume has participated in the Biennale de Lyon and Gwangju Biennale (both 2000), as well as the 3rd Biennale of Contemporary Art at the Garage Museum for Contemporary Art, Moscow (2009). He was awarded the Arnold Bode-Prize for his participation in Documenta 12 (2007).