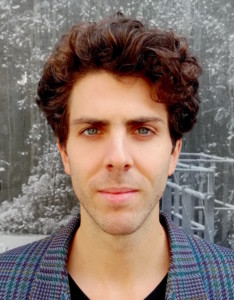 Thomas Ortiz’s work focus on the issues concerning energy, environment and human lifestyles. In 2012, he graduated from the Institut National Polytechnique following an Art and Science program. In 2014, he co-founded Matabase to develop the use of innovative and sustainable materials in creative communities. Since 2015, he is leading several actions with Atelier21, a think tank focusing on energy transition through social innovation.

In the same year, he worked as an independant researcher on the 2 year program Smart Grids Brain. This research explored the current development of energy and telecommunication networks through a citizen-oriented point of view.

He is the co-founder of Paléo-énergétique, a collaborative international research program investigating the past to exhumate forgotten innovations and patents in the public domain. In 2016, he developed RegenBox in collaboration with the designer Cédric Carles, the rst open-source alkaline regenerator based on a community.

He is also an active coordinator of SolarSoundSystem, an international network of sound systems powered by solar and human energy.