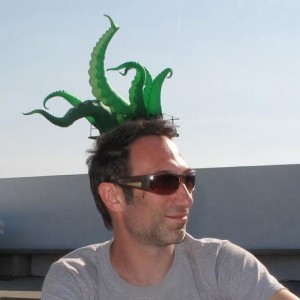 Filthy Luker and Pedro Estrellas form an urban artist duo who create environmental intervention and site specific installations. Working internationally, their action started in an emblematic place of urban culture: Bristol. They use an unexpected material: giant inflatable structures, creating a spectacular effect that reminds us of comics. Through these playful and monumental installations, their “Art Attacks” transform cities into jungles, giant monsters or trees who watch us and strike us.

The artists have produced hundreds of inflatable sculptures and through their unique style and innovation have become internationally renowned for their work especially in the street-art movement, often using images of nature such as giant squids attacking cities, creating diversions around huge banana skins and bringing attention to trees with googly eyeballs. Theses invading shapes remind us the forces of nature, ready to return and conquer its rights back.