IN CONVERSATION WITH YAO LU

Yao Lu (姚璐), born in 1967 in Beijing, is a Beijing-based artist and Professor of Photography at the Central Academy of Fine Arts.
Yao Lu creates landscapes from landfills and piles of litter, covering them with a green net before photographing them from different angles. Next, he creates a photomontage made up of details taken from his pictures, to which he adds elements and effects characteristic of classical Chinese painting. 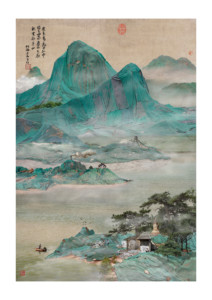 Your work raises awareness of the effects of urbanisation and its consequences on the environment. Why are these issues important to you? Yao Lu: I was born in Beijing, and I have a strong interest and love for the city’s inhabitants and history. Beijing is currently undergoing unprecedented changes. A large number of ancient things vanish in an instant due to the impetus of forklifts, and are replaced by high concrete buildings and wide roads. Beijing is growing like an inflated balloon, but those things that can evoke people’s memory of history and the past are becoming fewer and fewer. The lost things will remain in people’s memory for a period of time, and after a generation has passed, there will be a blank, and what will be left to future generations are simple and impetuous new buildings with no character, the humanity of the city having disappeared without a trace. Of course, Beijing is just a typical case, this “movement” is being repeated all over China. All of these disasters are brought about by “development” and “modernisation.” When I created this body of work, I couldn’t help but think about this issue. These ruins also refer to the garbage all around us. All of this contributes to the mood in which I create my work, which is heavy and sentimental.

Your works are made from photomontage and take on the appearance of traditional Chinese paintings. Why did you choose this technique? Why this historical evocation?
YL: The main reason is that the mountains of garbage collected are very similar to our green landscapes, so it associates naturally to this style. I did not refer to a particular style of ancient painters because it wasn’t necessary. Instead, I adopted the form of ancient Chinese traditional painting to transcribe my reality because the shape by itself is sufficient. However, during the lengthy research process, I was deeply impressed by the works of Huang Gongwang, Ni Zan, Tang Yin, Wen Zhengming.
Throughout the production process, I used a variety of means and techniques, such as on-site shooting, image scanning, downloaded online images, and so on. The guiding principle was to conform to the painting, including the file size, perspectives, whether or not the scene fits the picture, etc.

Do you think that ancient Chinese philosophies can inspire us to live better in harmony with nature?
YL: I’ve always believed that humans should respect and revere nature, because our disorder and blindness harms the mountains and rivers that have formed over thousands of years. Ancient Chinese thought speaks of “harmony”. We need to improve even just a little, so we do not destroy the equilibrium that exists. Human beings must finally wake up and learn to coexist with nature.
More and more Chinese people are becoming aware of the importance of environmental issues and the threat to traditional culture and are actively working to preserve them, but this will take a long time.

How is your work perceived in China?
YL: The form of these works is understandable to Chinese people because they are very typical Chinese paintings. Of course, as for the ideas conveyed in the pictures, a little understanding is required. 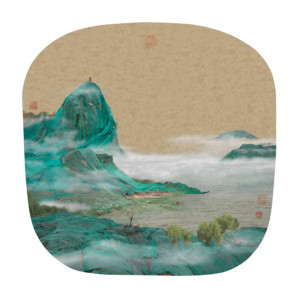 Are artists based in China becoming more and more concerned with the environment?
YL: That’s right, environmental issues are a major concern for all of humanity, and many artists I know here have also begun to address this issue. Since 2008, I have taken part in numerous exhibitions, forums and conferences on environmental topics. It’s an area that has been developing for more than 10 years.
I think, as an artist, the most important aspect is to have my own point of view. An artist, in my opinion, is an intellectual who has technical or even technological capabilities. Our work should strive to express our emotions and our true inner state.

What are your upcoming projects?YL: I’ve recently completed two or three series of works, and in them “green landscape” has gradually faded from my themes, while concerns for human survival and our living space remain central. Furthermore, the new “NFT” form has influenced creative possibilities, which I am also exploring.

Lou Anmella-de Montalembert shares her passion for Asia contemporary art through her association ACA project and her company maison jade art. In 2022, she presents the work of Chinese artist Yao Lu in the exhibition “Impermanence of All Things” she has curated for OPENART Advisory+Projects.

About the Author: Celine