FALL 2022: ART WILL NOT COOL DOWN AFTER A SCORCHING HOT SUMMER

Summer is coming to an end and we will remember it for a long time as it marked a turning point for record-breaking temperatures everywhere on the planet. It was simply impossible to turn our gaze away from the climatic urgency and its dramatic consequences for biodiversity and our lives. No wonder, then, that artists continue to call attention to the climate crisis, and the fall season that is about to begin is already dense with wide-ranging exhibitions that place this emergency and potential new paradigms at the centre of cultural discourse. Starting from Europe, across Asia, the Americas and finally into Africa, we follow the trail of this growing movement across the globe.

In Europe, the Venice, Berlin and Lyon Biennials in particular, accompanied by major exhibitions in European institutions, shed a light on our relationship with nature from various perspectives.

Following on from her exhibition at Ocean Space in Venice, Dineo Seshee Bopape is the subject of a major retrospective at Pirelli Hangar Bicocca in Milan, opening on Oct. 6. Her work shows how nature is a container for the memory of violence: both on humans and the planet. In Venice, the third chapter of the exhibition Planet B: Climate change and the new sublime (already explored in previous article) curated by Nicolas Bourriaud from Radicants curatorial group, opened at Palazzo Bollani on Sep. 8 under the title The tragic death of Nauru Island. The 27 invited artists, including Hicham Berrada, Bianca Bondi and Agnieska Kurant, show how the sublime represents the aesthetics of the Anthropocene.

Staying in Italy, at the Triennale di Milano two thematic exhibitions, Unknown Unknowns and Real World, explore the unknown with an ecological and poetic dimension. At Castello di Rivoli, in Turin, the group show (closing Sep. 18) Naturecultures, named after Donna Haraway’s theory, combines works by Arte Povera artists, who used common materials to bridge the gap between nature and culture, and living artists seeking to transform melancholy and guilt over the destruction of the planet into purposeful research towards a new future.

In Madrid, the Thyssen Museum will open an exhibition on Oct. 25 that touches on the theme of climate emergency through visionary storytelling and narrative mythology. The Third Pole by Himali Singh Soin stems from the artist’s exploration of the uninhabited areas of the Arctic and Antarctic poles to tell stories from a non-human perspective, that of ice, the primary witness of global warming. The show traverses postcolonial preconceptions and urgent climate issues, delving into the interdependencies of the natural with the occult.

In Portugal, the Museu Nacional de Arte Contemporaneado Chiado presents Echoes of Nature, a solo exhibition by artist Manuela Marques, which opens Oct. 6 and presents the notion of landscape in all its forms, establishing a dialogue between scientific and aesthetic discourses. 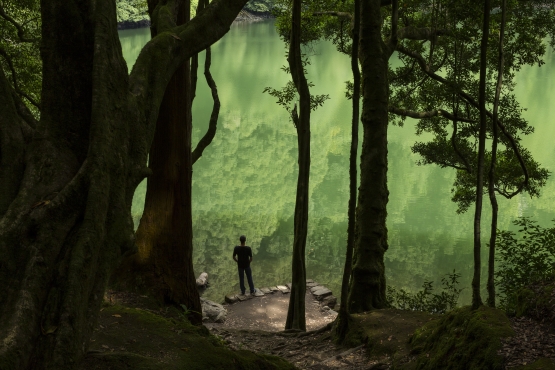 Heading north, Dusseldorf, Lille and Delft provide an entrance to a new culture of ecology

After Climate of Concern, two other new exhibitions open subsequently at Radius CCA, Delft, Netherlands, on Sept. 24: the group show Entangled Life, the 3rd chapter of the Underland year program, that will explore the multi-species intertwining that occurs in forest ecosystems; and Diana Policarpo‘s solo exhibition Nets of Hyphae that takes the ergot fungus as a starting point for an inquiry into the relationships between gender politics, economic structures and interrelationships among life forms. In Belgium, Otobong Nkanga (read our conversation here) is the subject of a solo show, Underneath the Shade We Lay Grounded, in a heritage gem, a medieval hospital in Bruges, closing Sep. 25. A dialogue between her works and that of the museum, it features Taste of a Stone, a formidable floor work made from 50 tons of white pebbles and stones that creates a refuge for reflection on the memory of Bruges’ past and trade routes between Europe and Africa.

On Sep. 14 the Tinguely Museum in Basel presents Territories of Waste – On the Return of the Repressed (until Jan. 8 2023), an exhibition that sheds light on the pollution of the entire ecosphere and how the extraction of raw materials has left behind a trail of destroyed landscapes. It brings together works by contemporary and latter 20th century artists, including Carolina Caycedo, Julien Creuzet, Agnes Denes, and Hans Haacke.

Germany offers a variety of exhibitions. In particular, the Berlin Biennale, closing Sep. 18 and curated this year by Franco-Algerian artist Kader Attia, demonstrates how much environmental issues are a trace of Europe’s colonial history and must be addressed in order to seek to “repair” its tragic memories. Artists Sammy Baloji, Mai Nguyen-Long, Monica de Miranda are just some of the many artists of note. Care, repair and healing are also the theme of a new show YOYI ! Care, Repair, Heal, opening Sep. 16 at Martin Gropius Bau in Berlin, which features the diverse perspectives of 26 artists including the aforementioned Kader Attia, Tabita Rezaire & Amakaba, and Wu Tsang.

At the Haus der Kulturen der Welt in Berlin, the exhibition “Earth Indices” is on view through Sept. 20. Artist Giulia Bruno and renowned photographer Armin Linke have closely followed the research of the Anthropocene Working Group, presenting photographs that aim to shed light on the specific procedures and tasks required to produce geological evidence. Julian Charrière’s new solo show opened on the 4th of September at the Langen Foundation, Dusseldorf, entitled Controlled Burn. This outstanding exhibition explores the politics and poetics of combustion and engages with our current climate and energy crisis: remarkably, with one of his installations, the artist also becomes a solar energy provider for the show. In Munich, the Haus der Kunst pays tribute to performance art veteran Joan Jonas with an extensive solo exhibition that opened Sep. 9. Since the early 2000s, the artist has become increasingly interested in current ecological issues in the wake of climate change, placing nonhuman life forms and ecosystems at the center of her artistic reflection.

In Lyon, the most important non-commercial contemporary art event in France, the Lyon Biennale, opens its doors to the international public on Sep. 14. Curated by Sam Bardaouil and Till Fellrath, its title Manifesto of Fragility, is an invitation to place fragility at the center of a new form of resistance. Ugo Schiavi‘s new monumental installation at the Guimet Museum opens our eyes to a future which “seems to be in a state of abandonment”. The artist blends natural and anthropic elements, creating an organism that reflects our current world. Perhaps the clearest representation of the biennale’s theme fragility, however, is the abrupt cut to subsidies (200,000 euros) by the region four months before the opening. A blow even harder to cushion given the biennale’s unprecedentedly large quantity of artists (over 200), venues (12) and new productions (60) that overshadows the idea of “fragility” that was supposed to inform the Biennale. Still in France, the Novacène* exhibition on environmental challenges continues in Gare Saint Sauveur, Lille, until Oct. 2, with 20 international artists including Haroon Mirza, Otobong Nkanga, Fabien Léaustic, Julian Charrière, Taisia Korotkova, Art Orienté Objet, Zheng Bo, John Gerrard… A dozen specially-produced monumental installations explore a possible post-anthropocene future.

The American continent wakes up and takes action

Sailing over to the American continent, where heat waves, fires, deforestation and the ecological crisis in general have marked much of the  summer. On the Brazilian side, Labverde, the iconic transdisciplinary platform based in the Brazilian Amazon focused on the development of artistic languages on the environment, has just welcomed the new residents of its “Speculative ecologies” program. Contemporary artist Chuan Lun Wu and ceramicist Vandria Borari now sailing to Rio Negro, to work on environmental justice in the Amazon. Its other collaborative and immersive residency program Labsonora will start on Sep. 22, around musical composition and sound production based on sensitive listening to environments, followed by a festival in Manaus in December. In addition, its Fungi Cosmology program (on the symbiotic relationships of fungi) is ongoing until 2023.

Further north in New York, where artist John Gerrard has just concluded a monumental exhibition at Pace Gallery featuring six wall-mounted simulations about climate change, the Brooklyn Museum has a program that is no less ambitious. Following Mona Chalabi’s exhibition exploring environmental justice and the unequal impact of climate change on Brooklyn communities, a new show by Brooklyn-based artist Duke Riley DEATH TO THE LIVING, Long Live Trash, running until April 2023, uses materials collected from neighbouring beaches to display both local and global marine devastation. Alongside exhibitions, The Brooklyn Museum is also helping the community to take action through its virtual teacher workshop programme.

Weather as an hot topic in Asia

China, Japan and Korea are also increasingly focusing cultural discourse on issues of ecology and especially sustainable architecture. Cloud Walkers at the Leeum Museum of Art aims to reexamine the role of Asian art and society at a time when Asia’s influence on the world order has grown significantly. The group exhibition investigates a new sustainable future through the work of 25 artists, including Aaajiao, Samson Young and Guan Xiao.

At the Art Sonje Center in Seoul until October 30, Seoul Weather Station by Moon Kyungwon and Jeon Joonho, uses artistic imagination to address environmental changes and weather disasters, and Songs for dying/Songs for living by Korakrit Arunanondchai, which refers to animist rituals and contemporary visual codes to present narratives in which personal stories are intertwined with historical events.

Finally, at MMCA, the National Museum of Modern and Contemporary Art of Korea, the MMCA Performing Arts 2022: Museum-Carbon-Project proceeds through October 30. This is a thought-provoking program in the form of a series of multidisciplinary events, questioning how to respond to climate change in the Anthropocene, including an accurate calculation of the amount of carbon emitted to produce an art exhibition, starting from the MMCA itself.

Africa: where art and climate will converge in November

We finish our tour in Africa, which is taking a major role in reshaping the role of art in the anthropological turning point that the climate crisis constitutes. 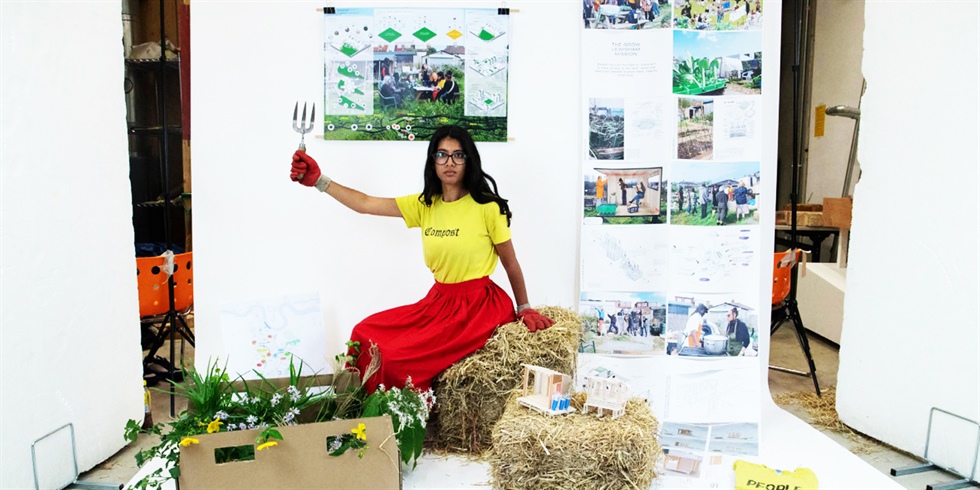 In Lagos, Nigeria, the new foundation G.A.S (Guest Artists Space) by Yinka Shonibare has joined the World Weather Network, where artists, writers and communities share observations, stories, reflections and images about their local weather. Raqs Media Collective will be the first G.A.S. residents and weather reporters. Its ‘Art for the Environment residency” program currently hosts another environmentally-committed artist, Mariam Hava Aslam, who is engaged in designing urban ecological spaces and using regenerative design.

The legendary expedition boat Tara, which has traveled more than 450,000 kilometers in the oceans since 2003 with hundreds of artists-in-residence, has just stopped in Senegal before going to the Arctic. At the Institut Français du Senegal, in Dakar, Ken Aïcha SY, founder of Wakh’Art, is the curator of Corps noir, absorption et rayonnement (‘Black matter, absorption and radiance’) which opened on Sep. 3 with the last Tara artists-in-residence, including photographer Nicolas Floc’h and sound artist Antoine Bertin.

Above all, Egypt will host this year’s 27th COP Climate (COP27), where arts and heritage will team up to defend the role of culture in the green transition and to alert on the impact of climate change on cultural sites. From Climate Heritage to Julie’s Bicycle and Art of Change 21**, various actors will introduce the underrepresented voices of artists into this international debate.

*curated by Alice Audouin, co-author of this article
** publisher of Impact Art News

Exhibitions mentioned in this article :

About the Author: Celine