Biocenosis21: success at the IUCN Congress

From September 3 to 11, the Art of Change 21 association (publisher of Impact Art News) presented Biocenosis21 , a contemporary art exhibition on the theme of biodiversity, at the IUCN World Conservation Congress. After Korea and the United States, it was France’s turn to host this quadrennial congress in Marseille, which brings together thousands of international experts and scientists, in order to assess existing, threatened or extinct flora and fauna. The French government (French Biodiversity Office) and Art of Change 21  created a partnership to include art in the Congress for the first time . Biocenosis21allowed thousands of Congress participants and visitors to discover works that br ought non-human living beings to the fore.

The curator Alice Audouin (president of the Art of Change 21 association and editor-in-chief of this letter) selected 14 French and international artists with a strong sensitivity to living things , and values ​​cent red around ethics. For Biocenosis21 , the artists combined knowledge, science, spirituality, technology , and political commitment to question the place of humans among st other species, and to suggest more egalitarian ways of “living together”.

At a time when the fall in biodiversity is accelerating and when a sixth mass extinction looming, artists are also becoming whistleblowers and the providers of concrete solutions: Michael Wang helps to reintroduce extinct species; Jérémy Gobé  tries to preserve the coral reefs; Tomás Saraceno  acts in favor of spiders … 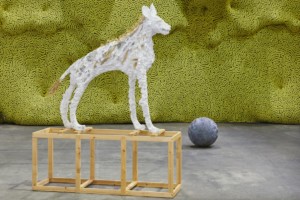 The many themes addressed in the exhibition by means of sculptures, photographs, videos, installations and drawings, included the destructive impact of human activities on biodiversity ( Camille Henrot , John Gerrard ); empathy and collaboration between humans and animals ( Tomás Saraceno , Lin May Saeed, Art Orienté Objet ); mourning over the disappearance of living things ( Janet Laurence ), the impact of nuclear energy ( Julian Charrière ); city ​​dwellers ‘ connection to the nature that surrounds them ( Marcus Coates ); the contemplation of the world contributing to its preservation ( Caroline Halley des Fontaines ); the regeneration of living things ( Jérémy Gobé ); the operation and maintenance  of living things in human activities ( Michael Wang ); the benefits of microbes , and particularly viruses ( Marie-Sarah Adenis ); deforestation in the Amazon ( Thijs Biersteker ); the common destiny of humans and plants in damaged territories ( Abdessamad El Montassir); the exploration of life in space ( John Gerrard ), and kinship ties between living beings  ( Marie-Sarah Adenis ) …

From August 27 th to September 11 th , two artists from the exhibition, Marie-Sarah Adenis  and John Gerrard , also presented two works at La Traverse, a multidisciplinary venue in the heart of Marseille devoted to art, gastronomy , and the circular economy . Two events also took place there as part of Biocenosis21, including a culinary event , Food for Art (Marie-Sarah Adenis X Pierre Giannetti X Ruinart ) , and a round table discussion chaired by the exhibition curator.

Alongside the exhibition, round table discussion s were organized within the Congress, inviting the artists of the exhibition as well as other artists, such as Zevs or Ardif , to discuss art and biodiversity in the context of the current ecological crisis.

The social and environmental dimension of the exhibition was reflected in its relationship with audiences and in the means of its own production. Audiences included dozens of school groups, but also more atypical audiences (prisoners, communities from the northern districts, etc.) who were welcomed throughout the event, guided by a specially trained mediator . M embers of UNADEV (National Union of the Blind and Visually Impaired) were also received by the artist Jérémy Gobe ́ for a tactile discovery of his installation. From an environmental standpoint, eco-design was integrated in various ways: as artists were selected from the same geographical area s , transportation was grouped to be eco-friendly , printing solutions were made greener and artists and teams travel led by train. This approach benefited from the enlightened advice of the Karbone agency, founded by Fanny Legros , also a member of Art of Change 21, and a partnership with the Dupon laboratory for more ecological printing.

The exhibition partners were the Schneider Electric Foundation, LVMH, the French Biodiversity Office (OFB), the French Ministry for Europe and Foreign Affairs. The exhibition was also sponsored by Maison Ruinart.