In conversation with the artists duo Bigert & Bergström

Art of change 21 – Your work has dealt with ecological issues since the 90s. How did that begin?
Bigert & Bergström – We met when we were students at the Royal Institute of Art in Stockholm. We were both regular visitors to the Biological Museum in the city which has been there since 1893. It’s a very special place where you can find old dioramas designed by Swedish explorer and zoologist Gustaf Kolthoff. These stuffed animals were presented as though they were in their natural environment, in wildlife – this was new in Nordic culture. Behind all the kitsch and the fakery, it can be looked at retrospectively as the first step towards ecology. We both had the same fascination and interest in this site, – which can tell us a lot about the image of nature processed by science, as well as scientific projects that utilize art. It inspired us to put together our first performance installation as students – a living diorama! It was in 1987 and we have worked together ever since.

AOC21 – When did your work begin to focus on climate change?
B. & B. – It all began with Biosphere 2, an experimental facility in southern Arizona that tried to produce a contained artificial ecological system to explore the possibility to live on other planets. We visited it in 1990 and then decided to create our own version of it for an art performance in Oslo. The performance space was freezing cold and we couldn’t heat the location. Half of the audience left. This temperature-related experience inspired us to our immersive installations called the “Climate Chambers” in 1994. In these chambers, the audience went into different kinds of extreme weather conditions, The chambers became platforms for discussions, of which global warming was a main issue. For that project, as with most of our projects, we collaborated with scientists. But our work on climate change reached an international audience much later, in 2015, with “Rescue blanket for Kebnekaise”. For the past two decades, the 40-meter-thick Swedish glacier on top of the Kebnekaise massif has been shrinking on average by a meter every year. We installed a reflective blanket at the top, to prevent it from melting. This was part of our series of works on geo-engineering.

AOC21 – As part of these geo-engineering performances, not only did you try to save the mountain ice, but you also attempted to divert a tornado!
B. & B. – Yes! In 2012, we wanted to see if we could do something with art to stop a global and irreversible phenomenon due to climate change: hurricanes, typhoons… which have become more violent and frequent with increasing atmospheric temperatures. We did a kind of land art performance based on a device, “the tornado diverter” that we built, which is supposed to be able change the direction of a tornado. We built it based on a real scientific invention by the Russian oceanographer Vladimir Pudov. Behind the performance, we really wanted people to think about the change in the weather which has become ‘extreme’ weather, and to think about geo-engineering as well. The longer we wait to combat these changes, the more we will be forced to use extreme and risky solutions too. But we also wanted to show hope in this approach of geo-engineering; that it can also be a solution if used at the right scale. We do “performance sculptures” and consider ourselves to be machinists. The earth machine is broken, and we are trying to fix it with art, often generating elements of absurd humor, and by doing that, we are demonstrating to people the problems that we’re trying to fix. Our artistic projects must open up discussions, that’s why we also work on agoras. Our Solar Egg is more than a small sauna, it’s also a place where eight people can talk. There are discussions inside the hot room, and it again comes back to temperature. 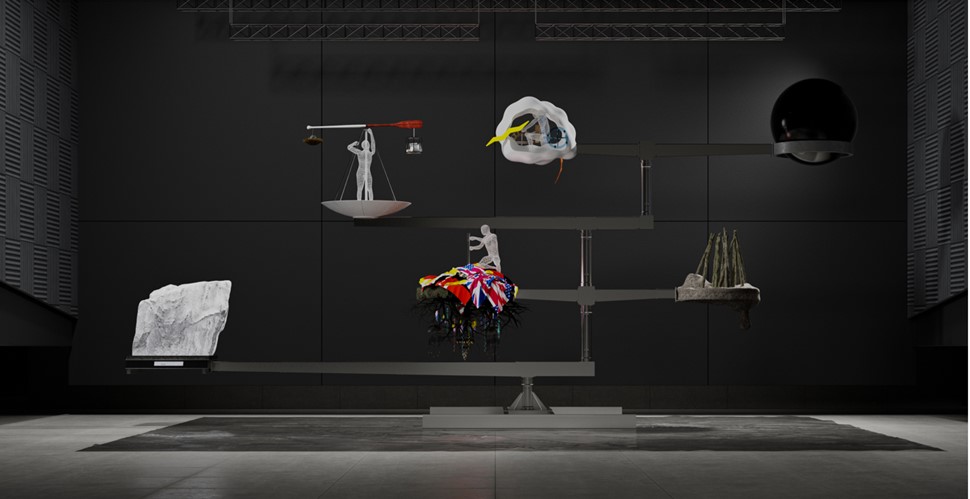 AOC21 – How can art help to bring more awareness on climate change?
B. & B. – I think art can help to embody abstract quantities related to climate change and make people really feel these in new and different ways. Now for instance we are collaborating with philosophers, climate psychologists, and sociologists connected to a big research program at the Institute for Future Studies in Stockholm. Together with them we are making a big performance sculpture called Tipping Point which will premiere next year. This piece will try to embody questions on how to think about future generations in connection to climate change. And we also just did a piece outside the School of Economics here in Stockholm,“CO2 Lock-In”; it is a sculptural installation but could be viewed as a communication tool. You lock yourself into a 300kg heavy iron ball and chains so that you can’t move and you’re unable to harm the environment anymore. Behind this humor, we believe that you get a sense that, as Blaise Pascal said, a slower life is required.

AOC21 – What have you learned from the current pandemic regarding the art sector?
B. & B. – For me, the main lesson is that art institutions such as museums are very fragile. Because of their size, like super tanks, many were unable to take a turn or adapt as the pandemic took hold, and they’ve closed and that’s it. Agility, flexibility, adaptation… seem to be out of reach for these big museums, which are central to the art sector. At the same time, many artists, including us, managed to organize initiatives, such as exhibitions in the forest. When you are not locked into a system, you have more space to maneuver. The fact that we artists immediately found solutions reassures me – we are part of the solution; we are not paralyzed!

AOC21 – How do you see the evolution of art in the age of the climate crisis?
B. & B. – The younger generation involved in the green movement, whether that’s Extinction Rebellion or Fridays for Future, will change the rules of art. These people will not be interested in supporting an art system that is tied to a carbon economy, oil companies and hence social inequalities. A huge change is on its way. Take a main Swedish auctioneer, Bukowskis. It has been breaking records and then more records these last few months and these records are trumpeted by journalists, especially when a piece is sold for twenty times its estimated price. It only concerns a very small group of very rich people, it fuels social inequalities, and it is quite shocking when the pandemic simultaneously causes so much added poverty! Bukowskis is owned by Lundin Group, an oil, diamond, copper and gold mining company. The chairman of Lundin Mining, a member of the billionaire Lundin family, is also the chairman of Bukowskis! And two weeks ago, a group of young activists from XR were violently being forced away by guards outside the auction house as they read poems and highlighted this unholy alliance between the oil industry and the art auction house. Hopefully the art system will change and become more sustainable as our transition to a carbon neutral world is happening.

AOC21 – What are your next projects?
B. & B. – Our focus right now is to finalize the huge Tipping Point mobile. And the Solar Egg is scheduled to be shown in Le Havre’s “Un Été au Havre” (One Summer in Le Havre) next summer. It was supposed to be shown this year but due to Covid it was pushed back to 2021!