Summer Quiz! How much do you know about Art & Environment?

For its July / August 2020 issue, Impact Art News invites you to play our Quiz to test your knowledge of contemporary art and the environment.

Check your results at the end of this text.

1.Which artist uses spiders to create his sculptures?

2. Which artwork has come to represent Donald Trump’s climate scepticism? 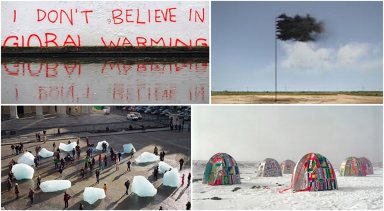 3. Which female artist did a project based on mining mica, the shiny and flaky mineral used in make-up, whose extraction generates many social and environmental impacts?

4. What was the carbon footprint of the Louvre Museum in 2014?

5. Which female artist pushed the boundaries of the human-animal relationship by having a horse blood transfusion? 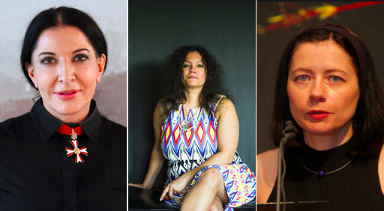 6. Which city has a coalition of art galleries committed to reducing their carbon footprint and supporting the shift towards ecological art?

7. Resurrecting the Sublime, a project by the artist Sissel Tolaas, has pulled off the crazy challenge of reviving the smell of:

8. For his current exhibition in Tokyo, Sometimes the river is the bridge, Olafur Eliasson decided to reduce the carbon footprint of shipping his artworks from Berlin to Tokyo. Which means(s) of transport did he choose?

9. In 2019, which contemporary music composer who worked with the sounds of nature was killed by a bear? 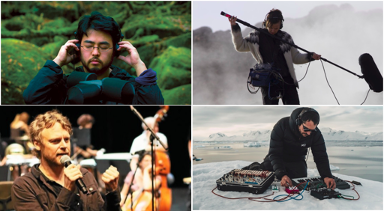 10. Committed to protecting the coral reef, Corail Artefact, a project by the French artist Jérémy Gobé, uses an unexpected material to regenerate the coral: what is it?

11. Which museum was targeted by activists over its oil industry patron?

12. In Extinct in the Wild, artist Michael Wang features an animal that now only exists in captivity: which one? 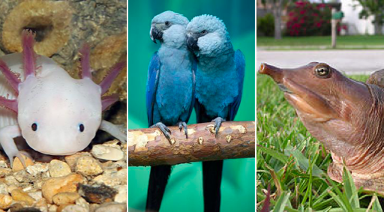 14. Which female artist wrote by mistake ‘global worming’ instead of ‘global warming’ on one of their artworks?

3) Otobong Nkanga
Her installation In Pursuit of Bling explores the many phases of mica processing – from extraction to use in make-up. It invites us to consider how we value these ‘bling’ products and the disastrous environmental and human impacts of their production chain.
Discover the interview with Otobong Nkanga in Impact Art News.

4) 8,733 tonnes of CO2 equivalent
This is the same as producing nearly 6,600 tonnes of paper (2,645,000 reams) or the diesel consumed by a city car travelling 1,150 times around the Earth! The main cause of carbon emissions is heating. This carbon footprint covers scopes 1 and 2 (but not 3), meaning the transport of visitors is not taken into account; if it were, given the Louvre attracts 10 million visitors a year, this footprint would increase to several million tonnes!
Find out more here (in French)

5) Marion Laval-Jeantet, from the Art Orienté Objet duo (France)
In early 2011, Marion Laval-Jeantet was injected with a large dose of hemoglobin and horse plasma for a performance entitled May the Horse Live in Me. The final artwork, which was filmed, lasts 1hr 15 minutes.
Watch the video here.

6) New York
In New York City, June 2020, 102 gallery owners and staff joined forces to establish a ‘new normal’ for the art world. They will work together to prioritise climate-conscious decision-making in their course of their activities.
Find out more here.

7) Extinct flowers
Hibiscadelphus wilderianus from Maui, an island in Hawaii; Leucadendron grandiflorum from Cape Town in South Africa; Orbexilum stipulatum from Kentucky, US.
Discover the interview with Sissel Tolaas in Impact Art News

8) By train, truck and boat
The artworks were first shipped by truck from Berlin to Hamburg, then by train to Taicang, China, via Malaszewicze in Poland and Zabaykalsk in Russia. After arriving at the port of Taicang, they were loaded onto a ship to Japan. Commenting on this initiative, Olafur Eliasson wrote: “We must all take action in our chosen fields and at every possible level. The time has come to act on behalf of the planet.”

9) Julien Gauthier
The 44-year-old French contemporary music composer was attacked by a bear in Canada, where he had gone to record nature sounds for a composition. He was canoeing down Mackenzie River and camping along the way, accompanied by Camille Toscani, a biology researcher and photographer. Seized by a grizzly bear and carried off into the forest, he was discovered the next day.
Find out more about Julien Gauthier’s music here.

10) Organic cotton lace
Young French contemporary artist Jérémy Gobé is leading the art-science-industry project Corail Artefact to protect coral reefs. It is based on “point d’esprit” lace from the town of Puy in France, which is structurally similar to many corals. The organic lace has an amazing ability to capture larvae and thus allows reefs to regenerate. The project will shortly be carrying out a massive scale experiment.
Discover the interview with Jérémy Gobé in Impact Art News
Find out more here.

11) Tate Museums
Under pressure from actions (amongst others) by Liberate Tate, oil giant BP ended its controversial 26-year sponsorship of Tate Museums in 2017.

12) The axolotl
New York artist and architect Michael Wang gave a central role to the axolotl in his project Extinct in the Wild, presented at Fondazione Prada Milan in 2017. According to classification by the International Union for Conservation of Nature (IUCN), a species is considered ‘extinct in the wild’ when it only survives in culture or captivity. Such is the case for the axolotl since 2006. This species of salamander native to Mexico now lives mainly in laboratories, where researchers analyse its unique regenerative capacities: this amphibian can regenerate its organs … even its eyes!
Discover this project by Michael Wang in Impact Art News

13) Brandon Ballengée
Love Motel for Insects is a long-term project by the American artist and biologist Brandon Ballengée. Started in 2001, it already has over 20 installations around the world. A citizen science approach, these sculptures use ultraviolet light to attract insects and allow the public to view them at night.
Find out more here.

14) Laure Prouvost
This mistake involved her installation The day global warming turned my jumper like this. It happened at two exhibitions – at Palais de Tokyo in 2018 (her solo show Ring, Sing and Drink for Trespassing), then at the Garage in Moscow, in 2019 (collective exhibition The Coming World: Ecology as the New Politics 2030-2100), which retained the slip-up, including in the title of the artwork on its website, see more here).
Our perceptive editor-in-chief Alice Audouin spotted them immediately on Instagram. 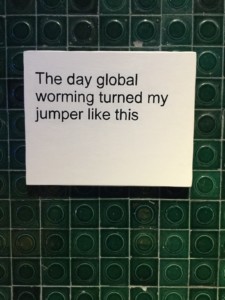 Quiz created by Alice Audouin in collaboration with Faustine Dehan.