VENICE BIENNALE 2022: THE POWER OF DREAMS

The 2022 Venice Biennale (April 23 – November 27) bears witness to a shift in our era, both in the eyes of its curator Cecilia Alemani and in the proposals of the various international pavilions and collateral exhibitions. This edition, with the eloquent title “The Milk of Dreams”, inspired by the title of a book by Surrealist painter Leonora Carrington, shows us what a more altruistic, ecological, feminine and equitable world could look like.

The Milk of Dreams is amniotic water for life

This year’s Venice Biennale curator Cecilia Alemani has fully embraced the etymological meaning of her position, of which “cura” means “caring”. Her exhibition “The Milk of Dreams” shakes up an anthropocentric and Western vision of the world by encompassing elements such as the cosmos, the invisible, soil, mythology and the ancestral knowledge of indigenous peoples. It showcases more feminine and inclusive art, as well as minorities that have long been in the background of the art scene.

The spectacular opening of her exhibition, both at the Arsenal with works by Ficre Ghebreyesus, Simone Leigh and Gabriel Chaile, and at the Giardini with a giant elephant sculpture by Katharina Fritsch, sets the tone. It is all about being jostled by other visions of the world through their deep invisible connections. Yanomami artists collaborate with English artist Emma Talbot, their gestures addressing the same question: our link to a “wild” nature, guardian of secrets, that we humans can understand only if we stay connected to it. Colombian artist Delcy Morelos invades one of the main halls of the Arsenal with earth, clearing a path through which the public can immerse itself in the powerful smell of soil, tobacco leaves and spices.

Among the artists known for their environmental commitment are Californian painter Jessie Homer French and Chinese artist Zheng Bo. In his video “The Rite of Spring”, the latter shows dancers penetrating the forest in the most literal sense of the term. The exit from the Arsenal by the labyrinthine and immersive path of Precious Okoyomon’s “To See the Earth Before the End of the World”, inspired by Edouard Glissant, is not without humour, given the installation’s incorporation of kudzu… an anti-hangover plant. 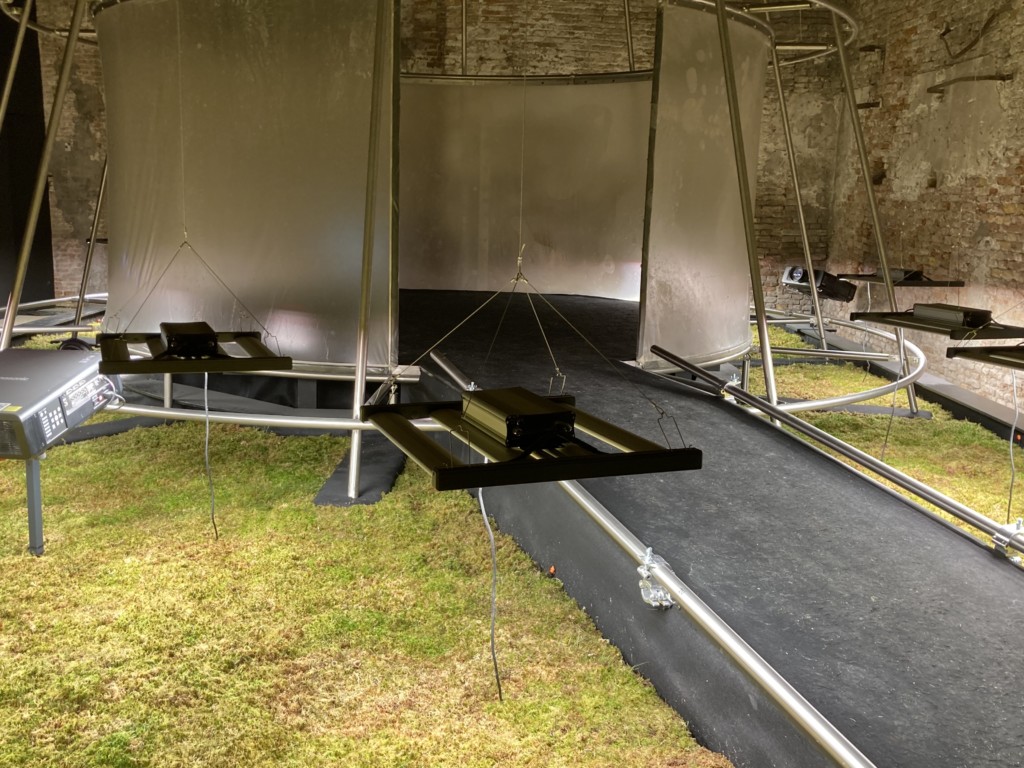 A greater connection between pavilions

Within the pavilions, we find the same mood as in the main exhibition, as well as the clear influence of the “Black Lives Matter” movement. While the Golden Lion for best artist was awarded to Simone Leigh, entrusted with the American pavilion, new African pavilions including Namibia and Cameroon join that of Ghana, which confirms its artistic strength under the curatorship of Nana Oforiatta Ayim. Otherness is at the heart of the approach of the Nordic countries, which have invited Sámi artists, the earliest Arctic inhabitants, to occupy their pavilion, as well as that of Poland, which offers its space to a Roma artist, Malgorzata Mirga-Tas. If Lebanon testifies to the chaos that the country is currently going through with a double-sided installation by Ayman Baalbaki and Abdul Rahman Katanani, Chile embodies the rebound of the country since its last elections. This pavilion, with the enigmatic title “Turba Tol Hol-Hol Tol”, plunges the visitor into a peat bog and makes us aware, through a multi-sensory approach, of our major role in maintaining the earth’s equilibrium and fighting against global warming. As part of a scientific partnership, the pavilion will also measure the amount of CO2 that the pavilion’s peat will have absorbed during the exhibition. This positive human-nature relationship has its roots in the connection of now extinct indigenous peoples with the Chilean land over 8000 years ago.

Finally, among the other most remarkable pavilions are the Belgian pavilion, where Francis Alÿs humbly presents children playing games, the Australian pavilion, with a striking series of photos and videos by Marco Fusinato shown alongside the saturated sound of electric guitar, and the German pavilion, which dares to take a pause to question its own role. 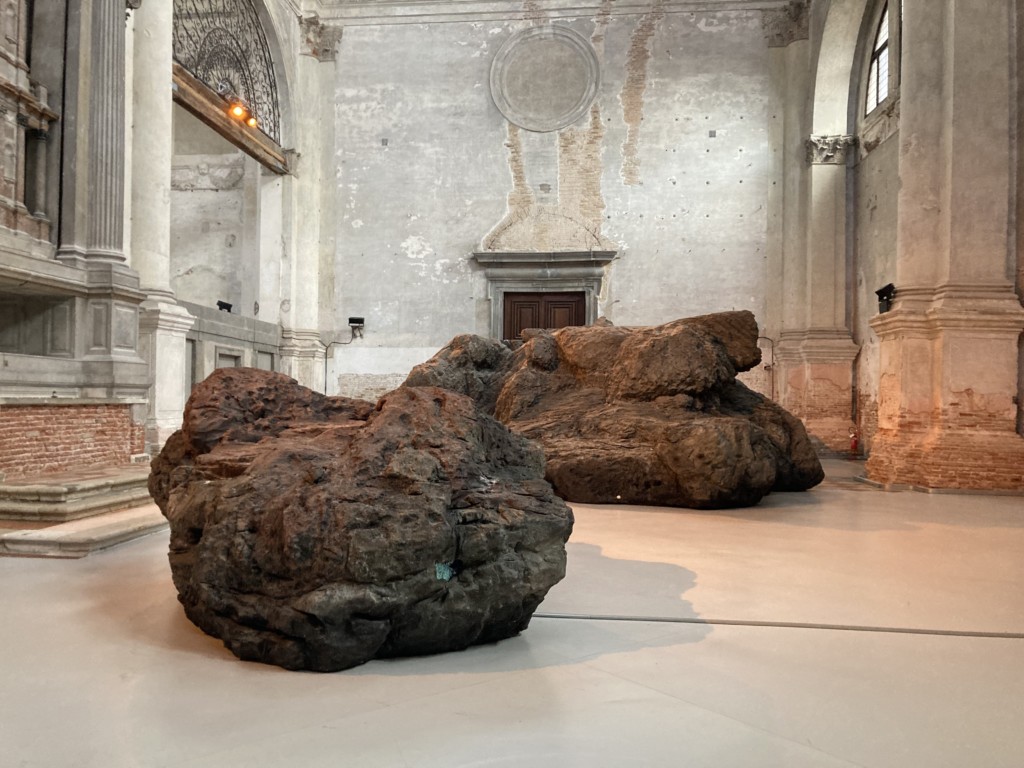 Among the collateral events of the biennale, several specifically address the environment.

Located in the renovated church of San Lorenzo, the art centre Ocean Space offers an exhibition curated by Chuz Martinez with two voices, those of Diana Policarpo and Dineo Seshee Bopape, testifying to the commitment of TBA-21 and its founder, Francesca Thyssen-Bornemisza, in protecting the oceans and raising awareness of its pressing issues through art.

Not far from there, at the Palazzo Bollani, an exhibition with the explicit title “Planet B. Climate Change and the New Sublime”, curated by Nicolas Bourriaud and his new collective Les Radicants, inaugurates the first chapter of a three part series. This first chapter “Every exhibition is a forest” brings together artists such as Bianca Bondi, Agnieszka Kurant, Ylva Snöfrid and Phillip Zach.

The exhibition “Medusa Alga Laguna” by Tue Greenfort (see his interview here) takes up the issues specific to the Venetian lagoon, whose equilibrium is being threatened by the proliferation of Sargassum algae and various jellyfish species.

In the Accademia district, at the Conservatorio di Musica Benedetto Marcello di Venezia, Parasol Unit’s collective exhibition “Uncombed, Unforeseen, Unconstrained”, explores the idea of entropy through the work of eleven artists, including Julian Charrière, Martin Puryear and Bharti Kher. The exhibition highlights this moment when entropy, the measurement of degree of unpredictability, reaches an unprecedented level due to climate change, analogously expressed in the video of a burning fountain “And Beneath It All Flows Liquid Fire” by Julian Charrière.

Elsewhere, the olfactory experience of the “ES-senze” exhibition, curated by Pier Paolo Pancotto at the Mocenigo Palace Museum in Venice, invites us to think of the world through sensation, and introduces the work of the young and talented French artist Florian Mermin.

Finally, to say goodbye to Venice and feel at once all its splendour and peril one last time, don’t miss the scintillating tapestry at the Scuola di San Pasquale of the great magician Otobong Nkanga. 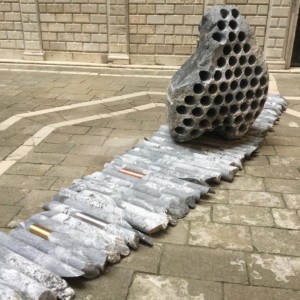 Crédits. Cover : Precious Okoyomon, To See the Earth before the End of the World,  « The Milk of Dreams » Venice Biennale  2022 @ArtofChange21