EXHIBITIONS IN FRANCE: SYMBIOSIS AT WORK

After a scorching summer, October was the hottest month since records began back in 1945. These upheavals, which continue to increase and prematurely exceed irreversible thresholds, are also accelerating reflection and artistic creation. The idea of fragility takes up an important place in the French current art scene, being at the heart of the 16th edition of the Biennale de Lyon entitled Manifesto of Fragility, which runs until the end of December (see our article). Institutions, foundations, galleries and museums are overturning the place of “nature” in art to shift the stakes to a relationship with the “living”, thus challenging an overly prevalent anthropocentrism. In this selection of 23 exhibitions, the living, the humus and the organic dialogue with the artificial and the digital, drawing a new symbiosis with humans.

Here is a selection of exhibitions in Île-de-France and in the region.

Since October 15, “Zoosphères” at the Domaine de Chamarande has been hosting the duo Art Orienté Objet (Marion Laval-Jeantet and Benoît Mangin), pioneers of ecological art for thirty years. The Superflex collective, created at the same time in Sweden and equally committed to the environment, is exhibited at La Maison du Danemark. Through “There Is No Such Thing as Bad Weather”, the famous Swedish trio explore climate change through three approaches: Technocentric, Anthropocentric and Ecocentric.

After “Nous, les arbres” (We, the trees), the Fondation Cartier puts the tree back in the spotlight with his accomplice, the “artist-sower” Fabrice Hyber, who is the subject of a major monograph from 8 December. Entitled “La Vallée”, this exhibition bears the name of a forest with hundreds of different species, sown thirty years ago by the artist in Vendée. The exhibition brings together more than sixty paintings, covering all fields of knowledge: history, mathematics, the body, mutations, biodiversity, etc. 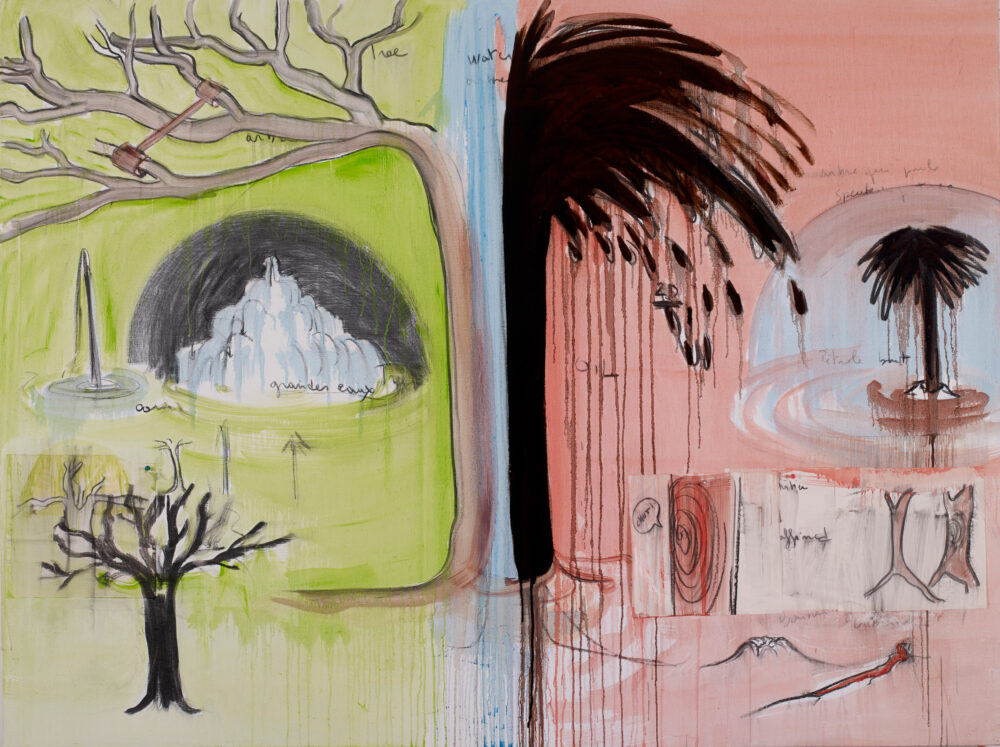 Fauna is at the heart of the exhibition “Musicanimale – Le grand bestiaire sonore”, at the Philharmonie de Paris, which deals with the living and its influence in the history of art (Tomás Saraceno, Julien Salaud, Bernie Krause…), as well as animal sounds: the song of birds, the rustle of insects, the roar of whales, the howl of the wolf… A great way to learn about biodiversity and the future of the species around us.

At the Fondation Louis Vuitton, Lydia Ourahmane presents her installation “Tassili”, an ode to the exceptional mountain site of Tassili n’Ajjer in the Sahara desert. A place where animal and plant life have been greatly disrupted and which has gradually transformed this site into a mineral desert.

The Art Center La Terrasse in Nanterre presents a double program, one dedicated to the practice of Lélia Demoisy with an exhibition entitled “Entre les deux rives de l’île fleurie” (Between the two shores of the flowery island) and the other devoted to Thierry Boutonnier, the artist behind the exhibition-installation “Where Do The Lights Go?”.

At Poush, the exhibition “The farmer, the researcher and the believer. Chapters I & II” inaugurates a long-term reflection on the landscape, and on what agriculture says about our relationship with the world. A poetic invitation, carried out in several stages, in which the works of Noémie Goudal, Sara Favriau, Wiktoria and Anne-Charlotte Finel (the latter three having won the Planète Art Solidaire Prize) are exhibited. 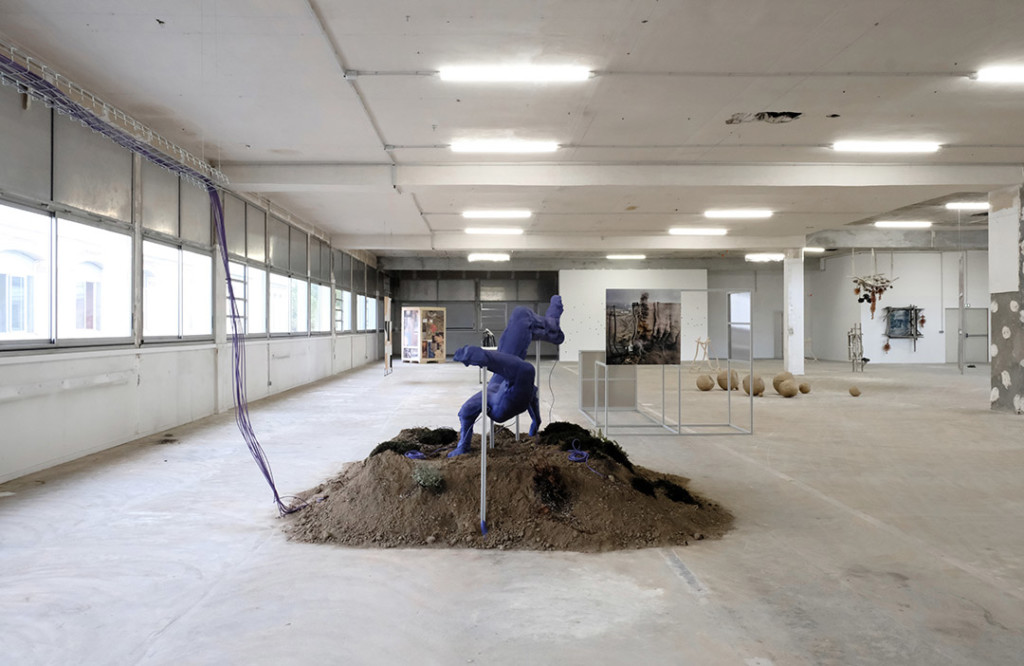 View of the exhibition “The Farmer, the Researcher and the Believer, Chapters I & II”, Poush, 21 October to 6 January 2023, credit: Grégory Chatonsky

In the MAIF Social Club space, the group exhibition, “Le Chant des Forêts”, brings together the work of artists: Florian Mermin (winner of the Planète Art Solidaire prize), Tatiana Wolska and Romain Bernini. Mythological, political, social and religious, the forest is approached here as a space for reflection that crystallizes all contemporary issues.

In a more classical way, at Centre Pompidou, the graphic art gallery presents 241 drawings by Giuseppe Penone, bequeathed by the artist. This ensemble offers a unique approach to the artist’s practice, which makes the tree a favourite theme.

Finally, two more historical exhibitions provide a better understanding of the place of fauna and flora in the decorative arts and history. From Bernard Palissy to Johan Creten via Elsa Guillaume, the Manufacture de Sèvres shows their significance in “Formes Vivantes”, with nearly 350 works. For its part, “Un bestiaire japonais, vivre avec les animaux à Edo-Tokyo (XVII-XIX siècle)” (A Japanese bestiary, living with animals in Tokyo (XVII-XIX century) unveils its place in Japanese culture at the Maison du Japon.

In the Parisian galleries:

After a summer that was the scene of many forest fires, the Horae Gallery puts the forest in the spotlight with the exhibition “De l’esprit des forêts”, which brings together seven artists around Francis Hallé, famous botanist specialist of primary forests: Anna l’Hospital, Pascal Mouisset, Josée Le Roux, Florian Mermin…

The Marguerite Millin Gallery offers its second solo exhibition to Sarah Trouche, who questions hair as a weapon of protest and ecological repair (it is used to clean oil, for example) in her exhibition “HAIRS/HER”. This exhibition also hosts a work in homage to the current Iranian revolt.

The exhibition “Feu!” marks the creation of the See gallery, with ten artists, including: Marion Flament, Anne Commet, Vladimir Skoda, Bianca Lee Vasquez… who reveal a fire that illuminates, warming as much as it burns.

At the Michel Rein Gallery, Maria Thereza Alves exhibition “On Remembering for a Future” offers the opportunity to discover her new portable gardens and carpets with floral decorations, inspired by the Middle East. Once again, this great Brazilian figure of ecological art, shows her unique ability to make flowers talk about history and geopolitics.

Finally in the Parisian galleries, although you’d better hurry up, the Julie Caredda gallery hosts the exhibition “La Caverne” presents a solo exhibition of the artist Jonathan Bréchignac (the show closes on December 30). A visual, sensory, gustatory and sound experience in which the artist’s cave has become a total work of art.

With Luma, Agir pour le Vivant and soon the Thalie Foundation, Arles is becoming a stronghold of the link between art and the environment in France. Since November 11, at the Vincent Van Gogh Foundation, a group exhibition “Nature Humaine – Humaine Nature”, brings together the work of prestigious artists such as Pamela Rosenkranz and Otobong Nkanga. Questioning the position of the human in front of his environment, the exhibition also explores the impact of the digital and the artificial on the human body.

At the Centre d’Art Le Portique in Le Havre, Michel Blazy makes the making of humus the main subject of his exhibition “Six pieds sur Terre”. A sensory experience renewing with the living, with a magic carpet which is discovered “by the feet”!

As part of the Nice Arts Biennial, the MAMAC highlights the plant through the exhibition “Devenir Fleur”, with the works of 30 artists including Bianca Bondi, Anaïs Tondeur, (winner of the Planète Art Solidaire Prize), Uriel Orlow, Nils Udo and Zheng Bo… Also to be discovered at the MAMAC Contemporary Gallery: Irene Kopelman’s collaboration with two research laboratories on the regeneration of marine models.

At the Museum of Grenoble, the exhibition “De la Nature” questions the human relationship to nature through the works of artists: Philippe Cognée, Cristina Iglesias, Wolfgang Laib or Giuseppe Penone.

In Roubaix, the great innovator William Morris is invited to contribute to the reflection on the role of the decorative arts in the service of a committed vision of society, where the arts enter into harmony and contribute to concrete social and ecological progress.

Florian Mermin wonderfully perpetuates this approach linking decorative arts and the environment in a solo exhibition: “A Morning of Flowered May” at the Fondation espace écureuil.

Exhibitions mentioned in this article:

Other exhibitions to see: