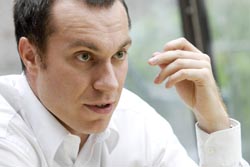 François Gemenne is a research fellow in political science (CEDEM – University of Liege, Belgium / CEARC – University of Versailles, France), and he’s is also an associate expert with CERI – Sciences Po, France. A specialist of environmental geopolitics and migration governance, he also lectures on these issues in various universities, including Sciences Po (Paris and Grenoble), the University of Paris 13 and the Free University of Brussels. His research mostly deals with populations displaced by environmental changes and the policies of adaptation to climate change. He has conducted field studies in New Orleans after hurricane Katrina, Tuvalu, China, Kyrgyzstan, the Maldives, Mauritius and Japan, after the Fukushima disaster.

François is also the director of the Sustainable Development series at Presses de Sciences Po, a leading French academic publisher, and the president of Ecosphere, a Brussels-based think-tank on environmental issues and human rights.

ACTIONS DURING THE COP